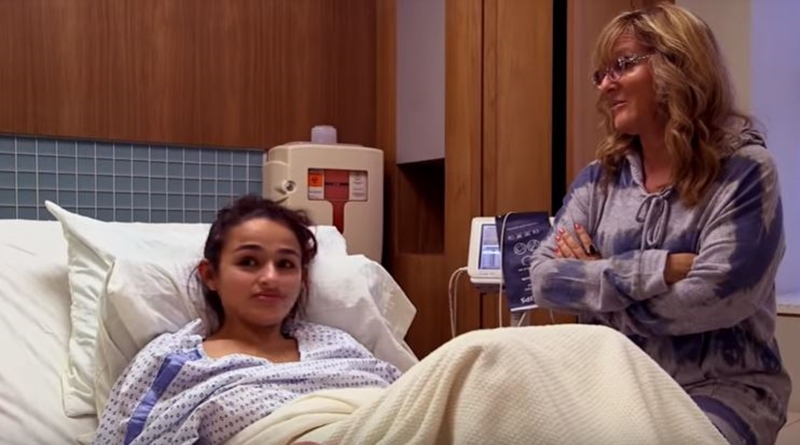 I am Jazz showed Jazz Jennings going into hospital for her gender confirmation surgery. During Tuesday’s episode, and even before it aired, Jazz picked up a lot of haters across her social media. Jazz took to her Twitter to tell haters to respect the choices that she makes for her own body.

The followers of TLC’s sometimes controversial shows definitely don’t always follow because they love the reality TV stars featured in them. Sometimes, people choose a favorite person, as in Little People, Big World, or programs like Sister Wives and Counting On. Often, this leads to arguments or condemnation from other followers. However, Jazz, perhaps the most controversial figure on TLC at the moment, garners more haters than usual.

While Jazz may be highlighting the issues transgender people experience, many people cannot understand how a boy could wish to be a girl. In the case of  Jazz, her extreme surgery to construct a vagina met with lots of disapproval. Comments included how Jazz should think about the day she meets her maker. Many of those comments seem to stem from critics with a religious background.

Others think TLC exploited a young boy who would be better off seeking therapy. Yet others think Jazz was far too young to go on hormonal treatments that meant her boy bits never fully developed through natural puberty. Many I am Jazz critics felt that social media is a place to outright voice their homophobic comments. Meanwhile, others see her parents as being wrongly supportive.

Jazz dealt with a lot of haters ever since the show started. Probably, she finally had enough of all the negativity on her social media as she went on Twitter to hit back. She said in a tweet Tuesday night that her father even recognized the need to respect something she desired. He said, “She’s a whole person already,” with regards to her choices.

Elaborating on that, and possibly angry that so many people criticize her family, she noted that the gender change was her own choice. She feels that nobody watching I am Jazz should tell her what she “can and cannot do” with her “own body.” Additionally, how she chooses to share her story is not up to anyone else. Finally, Jazz ended by asking people to respect the choices she makes.

”She’s a whole person already, this is just something that she's always wanted.” – My dad in reference to the gender confirmation surgery. This is MY choice, and no one can tell me what I can and cannot do with my body or how I should disclose my story❤️ Thanks for respecting😘

While so many people slam Jazz and her family, she also garnered many I Am Jazz fans who totally support her. They counter the hate by sending loving and supportive messages to her. Over on Instagram, here’s what a few of them had to say about it:

What do you think about Jazz Jennings hitting back at haters and telling them to respect her choices? Do think her parent should consider the ramifications of the surgery if it goes bad for her in the future? Sound off in the comments below.

New episodes of I Am Jazz air on Sundays on TLC.