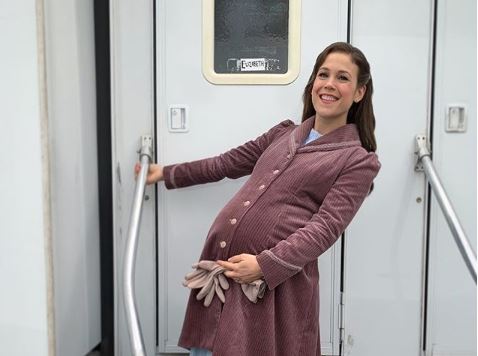 When Calls the Heart aired a big Christmas movie tonight. Elizabeth’s baby was born as everyone has moved on from the death of Jack Thornton. This was really hard on everyone, but now there is a new reason to be happy in Hope Valley. Elizabeth, played by Erin Krakow, gave birth to a little boy. She named him Jack Jr. after her late husband.

Elizabeth has a new love, but that is her baby boy. For now, it looks like she will be single for a bit and just focusing on being a mom. This is something she has always wanted. It will be harder without her husband by her side, but Elizabeth has a ton of support.

Elizabeth is enjoying the best part of being pregnant – eating for 2! ?? #Hearties @hallmarkchannel @erinkrakow pic.twitter.com/YS7h9eHF7N

ET got the chance to have a talk with Erin Krakow and get some details about the new baby. This was before the Christmas show aired. She didn’t give away any spoilers at this time. One thing she did share was that everyone on set treated her like she was pregnant. Erin wasn’t expecting in real life, though. Here is what she shared.

“Everyone was so nice to me! I mean, they’re normally nice to me but this was like, ‘Do you need a tea? Be careful on that step. Do you need help getting in and out of that chair?”

The new baby is played by twins on the show. A lot of shows do this since children are only allowed to be working so many hours a day. This shows that the new baby Jack Jr. is going to be a big part of the show. Erin even became close with the mother of the children. She has been sending her pictures and updates. Hopefully, they all work really well together when the show returns for Season 6. It will be back on February 24, 2019, with a new season. Everyone is ready for more When Calls the Heart.

Are you excited for the big return of When Calls the Heart? Let us know your thoughts in the comments below. Make sure you don’t miss this show when it returns to Hallmark for a new season next year.