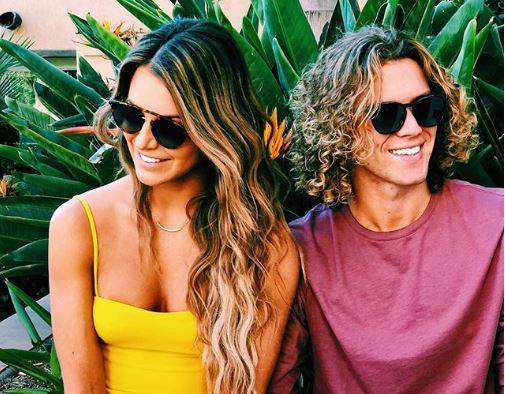 The Big Brother 20 runner-up, Tyler Crispen, didn’t just win “America’s Favorite Player”, he also won the girl of his dreams, Angela Rummans. Even though Tyler only got runner-up, he still thinks he won because he walked out with the girl he’s in love with which is a great prize. BB20 fans saw them exchange their first “I love you’s” on the show when they were separated from each other over the summer. Fans were not expecting Tyler to be in a “showmance” but he sure was, and they seem head over heels for each other.

Tyler Cripsen and Angela Rummans are always posting about each other on social media, they really do seem in love. Viewers were not expecting this surfer to reveal the crush he had on Angela on the show. No one saw it coming! Although, once he did, that’s all fans were focused on! Their romance story is like few others. Meeting on a game show and then out of the blue falling in love is crazy right?

Big Brother fans have fallen in love with showmances. Fans have seen several of these showmances turn into lifelong relationships. Jordan Lloyd and Jeff Schroeder, Rachel Reilly and Brendon Villegas, Daniele Donato and Dominic Briones, Nicole Franzel and Victor Arroyo, and many more Big Brother romances are still going strong! Nicole and Victor actually got engaged on Big Brother 20, how sweet! Now it’s Tyler and Angela’s turn to start a new life with each other.

These two enjoy the holidays

The hometown lifeguard brought the love of his life home for the holidays. They spent time with Tyler’s family. How much has changed at home since he’s been on BB20? Tyler states “It’s a little bit different this time. People are coming to say hi to me so that’s weird.”  By the looks of it, everyone looks up to him now! This game show has changed his life completely.  What is super crazy is that Tyler was just recently a lifeguard in Hilton Head, South Carolina. That just happens to be Angela’s hometown, what a coincidence! They must be meant for each other.

It is going to be interesting to see what they do for Christmas. You can assume it will be together, though. Maybe this time around it will be time to go to Angela’s hometown.

Don’t miss Big Brother when it returns to CBS next summer.